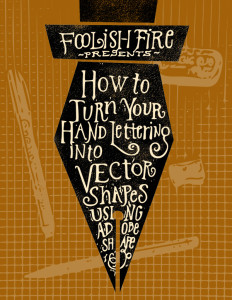 Tutorial: How to convert your hand-lettering into vector shapes using Adobe Shape

Stuff you’ll need if you want to try the techniques in this tutorial:  A smartphone or tablet running the Adobe Shape app A copy of Adobe Photoshop CC and/or Illustrator CC A Creative Cloud subscription (in order to make use of CC Libraries) . Here’s an FAQ page. (Sorry to any legacy Adobe application users. This tutorial relies on features only found of the Creative Cloud Libraries.) Hey kids, there’s … 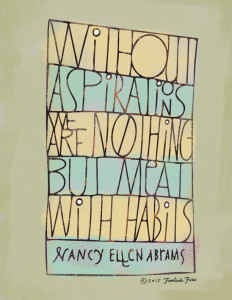 Without aspirations we are nothing but meat with habits :: Nancy Ellen Abrams

I read this quote in a recent article by scientist/philosopher Nancy Ellen Abrams on the NPR website and let out a “bwaaa-hah” that sent my cat into the next room. Love the pull-no-punches ideas from this author and this quote from her is both inspiring and a little sobering. And because I can’t help from spilling my guts about new hand-lettering techniques, here’s the deal with this one: I …

Without aspirations we are nothing but meat with habits :: Nancy Ellen Abrams Read More »

How to Make Kombucha in 6 Easy Steps :: Anatomy of a Runaway Infographic

I’ve been a serious Kombucha drinker for some years now and started making my own in 2013, partly to save money as store bought Kombucha runs about $3-4$ per 12 oz. bottle, as opposed to around $.50/gallon to make it yourself, but also because it’s just big nerdy fun to make a bunch of tea, stick a gelatinous frisbee thing in it and end up with some weird, fizzy …

How to Make Kombucha in 6 Easy Steps :: Anatomy of a Runaway Infographic Read More »

I like inclement weather. The closer I physically get to the fog-shrouded coast the more chipper becomes my demeanor. But this is nuts. It’s frickin’ May, it’s flippin’ California and it hasn’t gotten above 68 for weeks. My cats are velcroed to the bed. I’m wearing a sweater as we speak. I know this qualifies as a heat wave in god-forsaken zip codes like Minnesota but we Cali types …

Mercury, dirty dishes and how I survived WalMart and lived to tell about it—a skeptic’s journal.

I don’t believe in astrology because I try to be a rational, reasonable person. That said, I swear I can predict when Mercury has gone retrograde. For you uninitiated who may not be familiar, the term “Mercury going retrograde” refers to a celestial phenomenon wherein 3 or 4 times a year the planet Mercury appears to “catch-up” to the Earth’s orbit and appears to be moving in an opposite, or …

Mercury, dirty dishes and how I survived WalMart and lived to tell about it—a skeptic’s journal. Read More »

Sorry to be ringing in the New Year with something so tragic and dire but as a former photojournalist and rational citizen of the planet, this is For Charlie Hebdo and the journalists who died needlessly, shamefully, stupidly in Paris on January 7.

When I launched FF back in 2007 I envisioned it as a personal playground, a sketchbook, a sandbox and a refuge from my daily graphic design job, which can become more “production” than “creativity” on any given day. Not complaining—I’m lucky to be paid for what I love to do—but every job has it’s drudgery. So FF was created as a place devoid of clients, art directors or deadlines. …

Flow Magazine is the finest publication in the world…

And not just because they commissioned and published an illustration from this blogger, but I won’t lie, it does go a long way. Would I have so passionately recommended Portable Restroom Operator magazine (a real publication…I Googled it) if they’d bought an illustration? Not likely. Okay maybe. But seriously, Flow is the real deal. If you’re not familiar, Flow is a Dutch publication directed mainly toward women seeking to …

Flow Magazine is the finest publication in the world… Read More »

It’s been a while since I’ve posted anything to Illustration Friday so thought I’d offer my take on this week’s theme.

Be the Hero of Your Own Story

I wrote this line but it’s probably not original—don’t care, didn’t check. It felt authentic in the moment. I’d created the little flying dude a while ago after looking at a book of primitive African motifs. He represents some kind of hybrid bat/man in African mythology. So… bat + man = Batman = hero = hero myth = Joseph Campbell = follow your passion = be the hero in your own narrative. And that’s the way that particular rabbit hole happened.   …

Be the Hero of Your Own Story Read More »