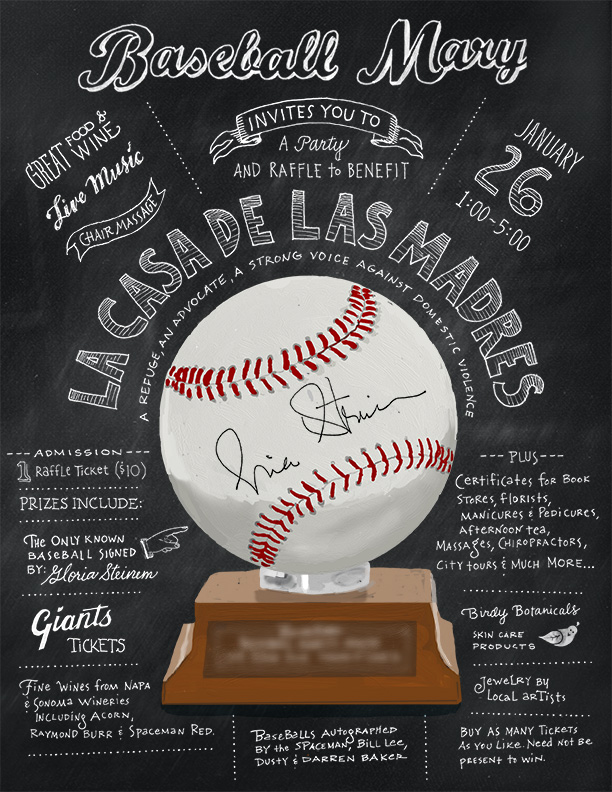 Baseball Mary is the ultimate San Francisco Giants fan and somewhat of a force of nature. She’s also famous for her annual invitation-only fundraising party which targets a worthy non-profit or a family or individual in need (one year it was Bryan Stow, the unfortunate SF Giants fan who was beaten within an inch of his life in 2011 at a Giants-Dodgers game in L.A.) This year it’s La Casa de las Madres , a San Francisco-based non-profit that advocates for solutions to domestic violence and provides resources and shelter for battered women and children.

Mary raises thousands of dollars every year by holding a raffle during her party which draws donors from major league baseball, local businesses and even a few celebs in and out of the sports world. This year Mary scored big and (somehow) got ahold of a baseball signed by Gloria Steinem, maybe the most unlikely autographer (if that’s a word) of a baseball ever, and will raffle it off at her upcoming party on January 26 along with a lot other cool merch and services.

Mary and I were introduced three years ago through a design client and I’ve been doing her invitation/poster since on a pro bono basis. This year I executed the piece by hand. I digitally painted the Steinem baseball first, then did the lettering, then decided to put the whole thing on a chalkboard background.

But holy crap…am I rusty!! I wish I could say I sat down, taped a fresh piece of paper on the drafting board and did this whole thing in one sitting but not even close. By the time I called it a wrap I had inch-thick stack of paper with bits and pieces of re-worked text and a worn out scanner. Oh well. Mary liked it = I’m happy. Back to the practice pad, though. Seriously.

BTW…I blurred out the address so ya’ll wouldn’t be showing up from Poughkeepsie trying to score that Gloria Steinem baseball uninvited. Nothing personal.