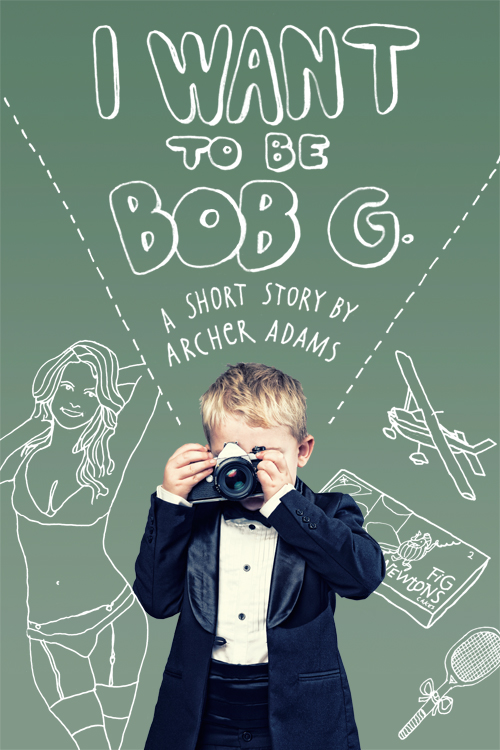 It’s the late 70’s. A six-year old boy finds some Penthouse magazines in his neighbors trash and after reading a story about the infamous Penthouse photographer and publisher Bob Guccione, decides his mission in life is to be “Bob G.”, in spite of his parents’ attempts to point him down a more respectable career path.

This hilarious, touching short story is from the pen of Archer Adams, a writer from Montgomery, Alabama and is available on Amazon. If you like David Sedaris, Jean Shepherd, you’ll love Adams.

Pixels passing in the night

But this is also a story about how collaboration happens in the digital world. Adams was all set to design his own book cover and contacted Foolish Fire via email after finding downloadable chalkboard backgrounds on the FF site. Not being a designer, he offered to hire me to do some hand-lettering as one option for his cover but quickly realized that Sedaris had used the chalkboard motif for his highly recognizable book Me Talk Pretty One Day and nixed that idea.

So step one…I asked Archer to send me his story to mine for inspiration and he basically had me hooked like a fish farm trout from the first paragraph. By the end I’d laughed so hard I nearly had to re-upholster my Herman Miller. The story stirred up a riot of imagery and after some brainstorming and a quick negotiation, we arrived at the solution you see here, sorta chalkboard-y but not literally, leveraging the hand-lettering to retain the innocent quality of the narrative and incorporating this freakishly bang-on image of the kid with the camera (which ironically could have been me at that age). The whole process took a few days.

As it turned out the girl on the left was the hardest element to get right, requiring several iterations and copious “research” on vintage Penthouse models on my part, which also turned out to be a very interesting exercise in explaining stuff to my wife. Deftly handled by yours truly I might add, except for “the forgetting to take down the reference print outs I had taped to the walls” in a timely enough fashion.

Call me “old school” but doing random projects like this still brings me back to that first, naive, emotional experience of sitting up in my bedroom with my new, beige Power-Mac G-Series I’d just bought at Sears. I recall the exact moment like it was yesterday…signing onto the “World Wide Web” for the first time with a non-graphical user interface and within seconds chatting with someone in Australia about sailing, in real-time on a fledgling online community called “The Well”. I knew nothing about sailing but it didn’t matter. Almost 20 years later, I still experience a rush when these kinds of serendipitous connections happen and better yet when ones and zeroes beget pixels beget book covers.

Stay tuned for much more from Archer Adams.