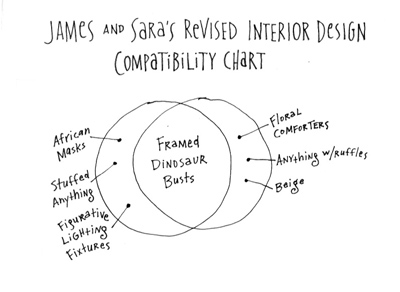 Once upon a time when my wife and I were dating and starting to talk about cohabitation, we had that “negotiation” to decide what items we would pool in order to decorate our new apartment. Both being artist-types and somewhat fussy about our space, we each had very specific ideas about how to curate our new combined collection of “objets d’art”. On most things we concurred, but I had emotional ties to a couple of pieces, the severing of which could prove to be painful i.e.

1. A mid-century, plaster of paris lamp depicting some African or Egyptian royal personage w/red lampshade. REJECTED.
2. The mounted skeletal leg of a small antelope (had an extra mutant patellar bone which made it super cool). REJECTED.
3. One stuffed piranha. REJECTED.

Suffice to say in the interest of corporate harmony and fairness, these objects were relegated to the attic (along with a few of hers) and in the process I learned some very valuable lessons about my roommate and eventual partner-to-be. Since then our interior design discussions have been non-contentious for the most part, but that’s because I thought I knew where to draw the line. Until yesterday…

While perusing a stall of vintage clothing and curiosities at the Treasure Island Flea Market on a pristeen San Francisco morning, I hear, “James…James…over here. There’s a velociraptor head under this table!” Cut to the scene in “Up” where the dog sees a squirrel.

To digress, there are a couple of ways to bring out the 9 year-old in me:

1. Tell me there’s a new Dr. Who episode.
2. Say, “James…James…over here. There’s a velociraptor head under this table!”

Indeed, there was a shockingly life-like and life-sized Velociraptor head, like a frozen 3D slice of discarded Jurassic Park footage wedged under a mid-century end table and up against a portable toilet disguised as a hat box. The next few minutes are still a blur. I only remember babbling something incoherently and handing over a wad of bills like a detoxing crack addict to a nice vintage-y woman with bright red lipstick and cateye glasses, who smiled and said she’d set it aside for us.

My wife immediately updated her Facebook status: “Been at the Flea Market 5 minutes, already bought a velociraptor head. Oops.”

This from the woman who vetoed my African lamp, refused to suffer my mutant antelope leg and nixed my stuffed piranha? I could only come up with 4 possible interpretations:

1. GLASS HALF EMPTY VERSION: Our relationship had devolved to the point where we need to supplement with life-sized reptile replicants just to stay awake. Ack. REJECTED.
2. GLASS HALF FULL VERSION: My wife got cooler when I wasn’t looking. A. Lot. Cooler.
3. DRUG RELATED: Some chemical in the hand-stamp ink is reacting with the receptors in her brain that affect tasteful office decor.
4. She’s taking the whole “eating Paleo” thing to a whole other level.

No matter. I gazed at her like a lovesick irish setter, slack jawed, re-smitten. Saturday morning cartoon pulsating heart on a spring heart-shaped eyes.

Take away: Surprise is the sexiest thing there is.